During the 1980s, the modern proverb “no pain, no gain” became part of the lexicon when referring to the physical results from strenuous exercise.

For Olivier Marchal, an avid runner and outdoorsman, the pain he endured from miles of running and hiking was unintentional. He eventually developed debilitating back problems that became so severe he was scheduled for back surgery at the age of 35.

“Every time we would go for a run, the next day I would have back pain,” Marchal recalled in an interview. “I thought it was because of my running and the pounding and eventually I quit running because of that.”

But with a simple twist of fate and the help of his wife, Nathalie Bouchard, Marchal not only was able to forego surgery, his “gain” included sharing his secret to orthopedic wellness when the couple created the SOM Footwear company.

Bouchard suggested her husband read the book “Born to Run” by Christopher McDougall, which is the story of a tribe in Copper Canyon, Mexico that runs barefoot or with minor footwear protection. It was a minimalist approach, with no bulky shoes with arch supports, elevated heels or tight-fitting toe constriction.

Marchal read the book and thought he would give it a try before undergoing the knife to try to fix his back problems.

“They don’t have any issues. They can run as long as they want,” Marchal said. “I read the book and I got intrigued, because those guys indeed run without shoes. So, one day I gave it a try. I took off my shoes and ran on the smooth pavement, and sure enough it took about 100 yards and that was it. I said yes and I was back to running basically. The back pain was caused by the shoes I was actually wearing.”

This transformation left Marchal thinking about how he could create a shoe that had the feel of barefoot movement that would protect the bottom of his feet from the rocks, pebbles and imperfections of the surfaces he was traversing.

“To run you don’t need shoes, you just need two feet,” Marchal said. “Running barefoot kind of hurt the bottom of my feet because you step on rocks, and I like to trail run. I don’t run on pavement. I got this idea that I was going to make a pair of shoes, and I made a shoe that looked like an elf’s slipper. But sure enough, I went out for a run of over 12 miles and when I got back home, I was like super happy and had no pain.

“I said that is all you need. You just need something to protect your feet from the ground and the rocks and just two healthy feet. You don’t need cushioning, arch support or all the gimmicks that come with the sports shoes of today.”

Marchal had been a long-time construction metal worker when he first entertained the idea of a barefoot-type shoe in 2011. After three years of experimenting with prototypes, Marchal and Bouchard sold their first pair of SOM shoes in 2014.

The couple has tweaked their minimalist shoe design over the years, and today have a successful manufacturing business in Montrose, Colo., where a staff of nine people design a line of five different shoe styles.

SOM is an acronym for Sense of Motion, and Marchal and Bouchard feel it is this natural motion one gets from a shoe that mimics walking barefoot that distinguishes their product from most footwear. SOM shoes have a wide toebox so that your toes are not constricted and hit the ground in much the same way as if you were walking in bare feet.

The soles of the shoes are flat without any cushioning. They are 8 millimeters thick, from toe to heel, and are made from polyurethane to protect the bottom of the feet from encounters with rough surfaces.

SOM shoes are not marketed as strictly running shoes, but are for everyday use whether it be for walking, hiking or running. The shoes are unisex, and have been sold to everyone from 7-year-olds to a 94-year-old man. The typical SOM Footwear customers are men between the ages of 25 and 44.

“Most older people, I have to say, come to us because they are so desperate to find a pair of shoes that won’t squeeze their toes, and a lot of people have foot issues like bunions, cramped toes and arthritis,” Marchal said. “It seems like our shoes help. I am not a doctor, but if our shoes help them, it is great.”

SOM shoes not only help with foot comfort but also contribute to the economy supporting the growing trend of Made in America products. The couple fully supports American manufacturing, despite neither of them having been born in the United States.

Marchal is a native of Colmar, France and met his wife Nathalie, who is French Canadian, on a small island near Madagascar. They were married in Canada and emigrated to New York in 1999 while Marchal was continuing his career as a metal worker.

After going through the immigration process and becoming United States citizens, they moved to Colorado because of their love of the mountains and surrounding terrain.

Their love of America has continued through their footwear business. SOM shoes not only are Made in America; the company also purchases its manufacturing supplies from American companies.

“We make our shoes in America because of the quality,” Marchal said. “Thinking about having my shoes made in China or overseas and then having them shipped here, I mean it is the other end of the world. Think of the environmental impact. It’s huge.

“It’s tough to make it here, there is no question about it, but it is worth it because our customers really appreciate a Made in USA product. They like that we hire local people, and it is good for our community.”

Most SOM Footwear models are available for purchase in the $125 to $175 range. The shoes are sold through the SOM Footwear website and at its factory outlet store in Montrose, located in Southwest Colorado. 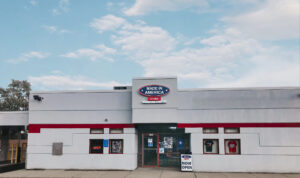 Defying the Odds, the Made in America Store Opens a New Brick and Mortar Location