Unfortunately, as the following graphs show, it’s far too early to begin celebrating.  In fact, at the current rate it will take more than 40 years to regain the industrial jobs lost since January of 2000.

If we continue to create jobs at a rate of 11,800 per month, it will take over 40 years to get back to the employment level we saw in January of 2000.  There’s a long way to go, and we need to adopt a national manufacturing strategy to help regain these jobs.

You can see, comparing jobs lost vs. jobs gained, that serious changes are needed to rebuild our manufacturing base.  152,000 is a good start, but its only 2.6% of the jobs we've lost over the previous decade. 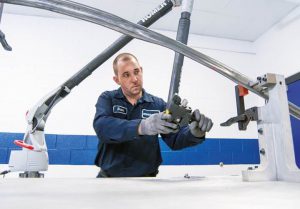 Yes, Manufacturing Jobs Are Coming Back. But Will Progress Happen Fast Enough?