In the early days of the pandemic, the Trump administration waived certain tariffs on PPE imports from China. But now there is plenty of Made in USA PPE — and yet the tariff exclusion remains in place.

When the COVID-19 pandemic first took hold in the United States in spring 2020, there was so little personal protective equipment available that doctors, nurses, first responders, and others on the frontlines were re-using things like N95 masks and wearing trash bags for protection.

The reason for the shortages was pretty straightforward. China, which had provided much of the U.S. supply of PPE prior to the pandemic, put a halt to its exports. And because the U.S. had become so reliant on China for PPE, there were few manufacturers of PPE left on U.S. soil.

But despite a litany of obstacles, American manufacturers stepped up. Companies like American Roots and American Giant switched their production lines to quickly make the PPE needed immediately to help mitigate the spread of the virus. Meanwhile, new companies sprung up across the country to begin manufacturing both surgical and N95 masks, along with other PPE the country lacked.

The latter took a bit longer to get going, given the logistics of starting these factories from scratch. But, all that hard work ultimately put the United States in a far better position to respond to the ongoing pandemic, restock the strategic national stockpile with American-made equipment, and be better prepared for the next crisis.

Now all of it is at risk — for the same exact reason the U.S. was originally positioned so poorly to begin with!

American mask manufacturers across the country are reporting that they are unable to compete against a flood of cheap imports from China. These masks, priced as little as a penny a mask, are made by Chinese state-owned or controlled companies and utilize unfair trade practices like heavy subsidies, currency manipulation, and lax labor and environmental laws to gain an edge.

If you come to this blog often, you know that these sorts of practices are just part of the playbook for China’s government, impacting everything from steel and aluminum to railcars and buses. But what makes this story unique is that the U.S. government is also giving China an edge.

In March 2020, the Trump administration provided some tariff exclusions for imports of medical products from China, including PPE. The reasoning was straightforward: America needed masks, and needed to do whatever it could to get them as soon as possible.

But now there are suppliers of American-made face masks and other equipment (and this is a good time to point out that many of the imports of PPE that came in from China were found to be ineffective or outright fakes).

So why are those tariff exclusions still in place?

The Office of the U.S. Trade Representative (USTR) is currently undertaking a review of the tariff exclusions, and America’s mask manufacturers are calling on the agency to end the exclusions. They aren’t alone: A group of prominent senators sent a letter to USTR Katherine Tai on Thursday, writing that “rather than providing relief to Chinese-made products, we should invest in and support our domestic manufacturers.”

As the virus first spread in the United States and we faced country-wide shortages of PPE, we asked American companies with domestic production capabilities to address these shortages and retool their product lines in service to their country. In response, many companies, including those that previously produced a different product, rapidly transitioned to domestic PPE production. As a result, domestic manufacturing capabilities for essential products like isolation gowns, N95 masks, testing swabs, and other critical products have grown exponentially since the beginning of the crisis. We must consider policies that support health care providers’ ability to access quality and affordable PPE.

The National Council of Textile Organizations (NCTO) also is sounding the alarm about the need to strengthen and support America’s PPE production. The organization unveiled a new video this week highlighting the work undertaken by textile makers across the country to build a domestic manufacturing base.

And it’s worth hearing the individual stories of some of these companies to understand just how much work has gone into building America’s domestic manufacturing capabilities for PPE — and what’s at stake if policymakers do not act to support it.

James Wyner, the CEO of the Shawmut Corporation, sent an email to our grassroots list of supporters today sharing how his company worked with a Boston-based developer to build an N95 mask production plant from scratch. The company spent $20 million on the state-of-the-art facility, which can produce 180 million masks a year. Shawmut hopes to employ 400 people at the plant.

But right now, that isn’t happening. The company actually had to lay off some of the employees at the N95 facility because of cheap imports from China. Wyner writes:

It’s disheartening that the U.S. government is choosing to boost the competitiveness of cheap imports from China, many of which are being dumped, at the expense of companies to set up to help fight both the current and future pandemics.

We know we have a good product, and we stand ready to compete. But right now, we’re not competing on a level playing field — and the worst part is that the U.S. government is giving China an assist!

In the wake of the COVID-19 pandemic, there was widespread, bipartisan agreement that the United States needed to take steps to reshore critical manufacturing and related supply chains. American manufacturers and workers stepped up. Now, it’s time for policymakers to do the same.

You can help. Tell the U.S. Trade Representative to end tariff exclusions for Made in China PPE. 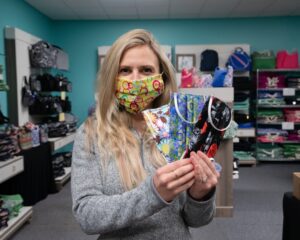 Need to Stock Up on Face Masks? Here are 30+ Made in USA Options