It’s considering it, but doing so would be a mistake.

The Biden administration is considering modifying tariffs on imports of solar panels from China. And lemme tell you: This would be a modification for the worse.

These tariffs have been around since 2018 when the Trump White House first put them in place. They’ve helped a few solar firms open production facilities here in the States, in a market that’s slightly more protected from cheap imports than they otherwise would be. This is good.

But while the Biden administration is considering extending the tariffs’ longevity, it would simultaneously ”double the amount of panels that can be imported before duties are imposed, from 2.5 gigawatts to 5 gigawatts,” wrote Politico this week. “And it would exempt double-sided panels common in large scale projects altogether.”

Domestic solar manufacturers, as you might imagine, are urging the administration to not make these changes, because they know what’s going to happen if they’re exposed again to Chinese imports at the rates these changes would make. China’s solar industry, which exploded in the wake of 2008 recession after its government poured hundreds of billions of yuan into it, is dominant. It supplies 75% of the world’s solar equipment. A fair amount of that is in China, which by itself accounts for about a third of all installed photovoltaic capacity around the globe. But solar’s use as an energy source is only growing, and President Biden has set a goal of reducing national greenhouse gas emissions in half by 2030. That will require the installation of a lot more solar panels here.

As such – the tariffs’ critics are clamoring to get them removed. Solar installers in the U.S. are really pressing their case, leaning heavily on the “the fate of the world rests on installing solar panels to fight climate change” angle. No less a lofty consensus media perch than the Washington Post editorial board made a similar argument just this week, and said it was a security issue to boot. In an piece that ran right next to another earnestly worrying about the Chinese government silencing a professional tennis star after she accused a prominent communist party member of sexual assault, the editorial board wrote:

“Deploying renewables as quickly as possible would have not just climate benefits but national security ones, too. Running more of the economy on clean electric power is an essential step toward freeing the nation from dependence on foreign oil.”

The national security argument made here, you understand, would have the United States trade its dependence on foreign oil for dependence on solar panels that have a supply chain riddled with credible allegations of forced labor, produced in the world’s most advanced police state.

Anyway, here are a couple of reasons not to get rid of the tariffs on solar imports made so wonderfully cheap by human misery.

A: What are we rewarding here?

Chinese mercantilism as it’s been practiced for the past few decades has actually driven down technological innovation in developed economies, according to a paper prepared by the Information Technology and Innovation Foundation.

Pressed by competition from Chinese firms advantaged by a favorable currency rate, a steady program of subsidies, and a years-long, state-backed campaign of IP theft, innovation-industry companies in North America, Japan, and Europe have cut back on research and development (R&D) spending, the paper argues. Meanwhile, in the case of the Chinese solar industry, the huge program of government support it has enjoyed hasn’t resulted in an explosion of clean energy innovation there – at least not when measured by money spent on R&D or the number of clean energy patents filed there. It’s just led to overcapacity and a bunch of bankruptcies in the U.S. when China’s state-fueled surpluses were exported here.

So … why should we reward this behavior with a tariff reduction?

Consider how dirty those Chinese solar panels really are – and I’m not talking about the stain of forced labor either. Most of the solar factories in China are coal-powered, meaning the actual production of these green energy devices are decidedly and significantly not-green. Politico got a pretty good quote from a professor who’s studied the concept of “embodied carbon” for some time:

“Having high-carbon renewable energy devices, the impact of that can cascade to really undermine the overall contribution that these PV modules should make” to combat climate change, said Dustin Mulvaney, a professor in the Environmental Studies Department at San José State University, who is part of a group working on a low-carbon standard for solar panels. “If we have this system set up where we’re ignoring how much carbon is in the supply chain, we really erode some of the greenhouse gas savings.”

And, of course, D: We’re never gonna have a solar industry in this country if we don’t allow one time to grow.

This is essentially the argument that a bipartisan group of senators made to the White House last month, and some Democratic members of the House made just this week.

“According to the (U.S. International Trade Commission), the … duties have been essential in helping our domestic industry expand and create new good-paying, Middle-Class jobs,” wrote Representatives Tim Ryan (OH-13) and Marcy Kaptur (OH-09). “In fact, the United States has set records for solar deployment every year that the safeguard measures have been in place; deployment in 2019 exceeded deployment in 2018 by 23 percent, and 2020 set a new record for solar installations.”

“Between the COVID-19 pandemic and the continued exclusion for bifacial solar panels, the domestic industry and its workers continue to reel from import pressure,” wrote wrote Senators Sherrod Brown (D-Ohio), Rob Portman (R-Ohio), Marco Rubio (R-Fla.), Bob Casey (D-Pa.), Mike Braun (R-Ind.), and Roger Marshall (R-Kansas). “As you consider whether to extend the solar safeguard, we urge you to extend the duties imposed on imported solar panels for four years, noting that the ITC makes clear: ‘an extension of less than four years would not appear sufficient for the industry’s efforts to adjust to import competition.‘”

If the tariffs come down the domestic solar manufacturing industry – which reached a 10-year market share high of (only) 20 percent in 2019 after being swamped by heavily subsidized Chinese imports that, again, have a supply chain riddled with credible allegations of forced labor – is gonna get swamped again.

Take them down now and the progress toward establishing a domestic industry will be lost. The U.S. market will be entirely reliant again on solar imports that have tons of embodied carbon in them, and that come with the real possibility that they were produced by ethnic minorities forced to make them by a powerful authoritarian state.

That’s why the tariffs should remain up. So keep them up, President Biden! 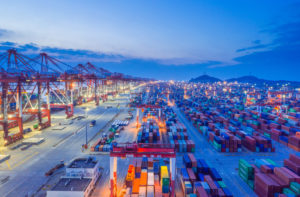 Biden Administration Will Keep Tariffs on Chinese Imports, At Least For Now