Eleven years ago, the Stern family was so inspired by the success of the sportswear company’s most popular shirt, featuring an American flag with the Declaration of Independence printed behind it, that they decided to create an entire company dedicated to patriotic apparel.

Appropriately named after the clothing item that started it all, The Flag Shirt now offers much more than shirts, including socks, hats, shorts, and – of course – face masks. As if that wasn’t impressive enough on its own, all of these items can be found Made in America on The Flag Shirt’s website.

“We’re a softer patriotic. We’re not political, we’re right down the middle. We just want people to be patriotic and proud of their patriotism – that’s really our goal,” explained Brett Stern, CEO of The Flag Shirt. Brett is the third generation of the Stern family to be in the clothing business.

Before The Flag Shirt, there was Lord Daniel Sportswear, the Stern family’s first business, which began in 1954.

Lord Daniel Sportswear initially did wholesale deals with companies such as J.C. Penny’s, Kohl’s, and Sears. But, around 2009, the company shifted to online sales “when we realized that a lot of these wholesalers that we’re doing business with were either heading out of business, or we’re not doing as well as they used to. We needed to figure something else out, and that’s when we started going direct to consumer,” said Stern.

“The thing is that we knew – for regular sportwear – the kind of competition that was out there. So to be niche, with a product that we knew, we [thought we] could really have something special. That was the idea” for The Flag Shirt.

Still family-owned and operated down in Sunrise, Fla., The Flag Shirt’s goal is to ensure that “when you come here and you’re looking for something patriotic, you will be able to find it.” There is certainly no shortage of clothing to pick from.

“We try to have as much variety of this possible, so that means we have cowboy hats, jewelry, all different sorts of clothing, and brands,” Stern said.

What sets The Flag Shirt apart from other patriotic clothing brands on the market is that they offer Made in America items.

Unfortunately, there are some limits to what The Flag Shirt is able to produce in the U.S., Stern said. “It’s just some of the items are so complicated that whether it’s an expense factor or even a quality factor, sometimes it’s just not feasible to make it in the USA,” Stern explained.

Customers will be happy to know that the distinction between items Made in America and other items could not be clearer. When looking at their online store, every Made in America item is very clearly marked as such.

“If we could make everything in the U.S., we would,” Stern said. “We’re proud to make clothing items in the U.S… and offer Made in the USA stuff. That is a big part of what we do.”

And The Flag Shirt offers customers a wide variety of Made in America patriotic apparel.

Their most popular item among women is the ¾ length sleeve shirt, which comes in several different designs. For men, the 1346 design, a golf polo shirt with the stars and stripes design on the sleeves, is most popular.

“People like [the golf polo] because they can embroider on it. It’s simple, its clean, and it says Americana without being so bold and in your face,” Stern said. “Plus, it’s Made in the USA. And I think that speaks volumes that our best-selling item is a Made in the USA product.”

Because of the quality of the items and the variety of designs they offer, The Flag Shirt appeals to Americans across the country. That said, they do especially well among older Americans, ages 40 to 75, people who golf, and veterans. “We don’t do as well with younger, military, tough guys. That’s not really our demo,” Stern said.

The reason The Flag Shirt knows their customer base so well is because Brett’s father, Stephen Stern, actually calls each and every customer that purchases an item from their website.

“We hear from about every customer, and they are so unbelievably shocked to hear from the owner of the company and talk to him. Most people can’t believe that that’s what happens,” said Brett Stern. “They all write in replies and say they loved talking to my dad and they appreciate what we do.” Cheers to this Made in America Collaboration! 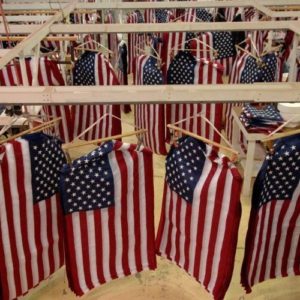 A Legendary American Flag You Can Buy This Fourth of July