The iconic hot sauce has been Made in Louisiana since 1868, with every bottle Made in the USA.

Tabasco sauce: the spicy red sauce made from tabasco peppers, salt and vinegar is an American cultural icon. You can find Tabasco in kitchens and restaurants all around the U.S., in the skies aboard Air Force One, in the household of Queen Elizabeth II, and in 195 countries around the world.

Chances are you’ve at least a dash of it on your food at some point in your life – and generations also have enjoyed the spicy sauce.

Tabasco has been around for a long time. The company was founded in Avery Island, Louisiana in 1868, and in those 153 years of doing business, every single bottle of Tabasco sauce has been Made in the USA.

Tabasco is a product steeped in history. It all started back in the early 1860s, when Edmund McIlhenny first cultivated tabasco peppers near his home in Avery Island along Louisiana’s Gulf Coast. McIlhenny then developed a recipe for a hot sauce and began bottling it, and it quickly grew in popularity in the Southern United States during the 19th Century. After McIlhenny died in 1890, he was succeeded in the business by his son, who helped to modernize the company into a leading condiment manufacturer.

Today, Tabasco is still distributed and owned by the McIlhenny family, of which current President and CEO Harold Osborn is a part. We heard from Mr. Osborn, who said that “we’re proud to say that not much has changed in our process since the first batch of Tabasco sauce was produced in 1868.”

During its long and storied existence, Tabasco has been a positive contributor to the local economy around its manufacturing facilities in Avery Island, where the McIlhenny Company currently employs about 250 individuals (and where Tabasco fans can take part in a factory tour and stop by the Tabasco museum).

According to Osborn, “every bottle of Tabasco sauce has been produced…by people whose families have been with McIlhenny Company for generations.”

Tabasco employees, and indeed Avery Island itself, have both been essential ingredients to the business, Osborn said. The McIlhenny company is now leading local conservation efforts on Avery Island, where rising sea levels threaten the low-lying area. The company is actively combating sea-level rise by planting grasses to rebuild coastal wetlands.

Osborn described their careful stewardship of approximately 30,000 acres of wetlands as one of the company’s proudest achievements.

“This land and the local community has been very good to us,” he said, “and as a good neighbor, it’s our responsibility to preserve and protect it.”

Of course, not everything has remained the same over the 153 years that the McIlhenny Company has been in business. As demand has surged around the world, facilities at Avery Island could no longer keep up, and while tabasco pepper seed stock is still grown in Louisiana, today, most of the peppers used in the sauce are grown in small farming cooperatives in South America and Africa.

But still, the company’s supply chain remains grounded in the United States, where Tabasco sauce is bottled and exported abroad. In this way, the McIlhenny company serves as a role model for American food and beverage manufacturers that seek to break into foreign markets. Tabasco is a case study that proves a company does not have to move their plants abroad to be successful.

The McIlhenny Company remains committed to values like conservation and remaining local, even as the company evolves — it recently took a big leap and launched a new line of BBQ sauces with a wide variety of heat levels and flavors. As Osborn stated, “we attribute much of our product’s success and staying power to those traditions.”

Check out the whole line of Tabasco-branded sauces online. 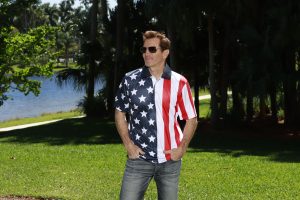 Looking for Made in America Patriotic Apparel? Look No Further Than The Flag Shirt Cobalt Street’s High-Quality Fashion Brings Together Social and Environmental Awareness, All While Being Made in America